We provide the comprehensive health care to the residents of children’s homes in Fukushima prefecture : we clean the environment in order to reduce the low level radiation, and make regular assessment of their physical state in order to detect and treat any damage due to the radiation at earliest possible stage. We extend our health care service to the staff of the homes. We also aim to bring public awareness and concerns for these children’s well being.

(1) Physical state’s assessment over the residents of children’s homes in Fukushima Prefecture
● We keep up their personal health record
● We monitor the radiation level inside the body：by measuring the cesium in the urine
● We monitor the radiation level outside the body：by registering the result from portable dosimeter
● We analyze the results of here-above measurements
● We give advice how to improve every day base hygiene according to the here-above analysis
● We operate other health checks, like ultrasound over the thyroid gland etc.

(2) Against the radiation effect over the residents of children’s homes in Fukushima
● We promote to measure radiation level of their food , and to choose safe food
● We get and match the fund necessary for reducing the radiation 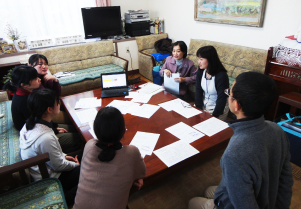 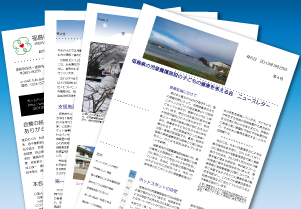 Food radiation: The children’s homes need a pertinent measuring room to determine the level of the food contamination. We looked for fund donors in order to newly build, refurbish or reinforce these rooms. By March 2013 we found and matched fund donors for 4 children’s homes.

Thyroid gland ultrasound check: Fukushima prefecture was investigating all its population’s health state by the thyroid gland ultrasound scan, called prior check. The children living in children’s homes, however, were not entitled to this health check because they did not have resident card at the institution’s address. In response to the plea for help from the children’s homes, we purchased an ultrasound scanner for thyroid gland and started to operate it for these children in December 2012. We have been operating the regular check over children and staffs in 4 homes.
At the age of 18, the residents leave the care home and start to work. By offering the transportation fee, we encourage them to come to get thyroid gland checked at their former care home. We also give them financial support for their commuting fee to the place of work.
Since 2013 the children have been entitled to any public health check.

Quixel badge(individual radiation measuring): In August 2012, we started to measure the accumulative radiation level with quick cell badge over children & staff in 2 homes. We have been operating this measuring in 1 home since April 2015.
For the detail, please visit the following link

Another radiation level measuring inside the buildings & gardens of the children’s homes and on the road to schools: In autumn 2012, we consigned the task to a supporting NPO and to a private company’s pilot sector.
Hot spots: We endeavor to find hotspots. If these hotspots need some building work for protection, we try to find a matching donor. We also support the decontamination work by volunteers at children’s homes.

◎Personal Health Record Book (From paper version to digitalized one as far as one with personal foster care record)
In January 2013, we held our first workshop and started to produce the personal health record book. This book shall allow children to keep their own personal health record by themselves when they leave the care home at the age of 18, start to work and live on their own because they can not live with their family. Each book has exhaustive record of radiation measuring results, as well as weight, height, vaccination, and all other ordinary health check record from schools and medical institutions.
In March 2013, we gave this personal health record book (in provisory paper version) to the children leaving 2 children’s homes as farewell present.
In March 2014, we gave a paper version of personal health record book to the children leaving 4 homes. The child having left another home received a visit in following September from their former caretaker who checked on them and handed them their record book.
The paper version is likely to be lost once the children left their foster homes. Each home should keep the digitalized record, which allow them to re-issue the record book in case of los. In 2013, we started to collect the information from each children’s home in order to put the data digitalization into practice. In January 2014, we assigned to a private firm the development of the digitalizing software, in collaboration with a religious corporation, Japan Lutheran Church.
In September 2014, we introduced the software to 6 homes in Fukushima prefecture and put it into operation.
In order to input the data as minute as possible at the least possible workload for the staff, we aimed at expanding the software’s function to allow recording the child foster care data. This expanded software has been under trial since September 2015 and will be in a full operation by the end of 2015.
This “Developing project for digital recording system of personal health data” is a fruit of 3 parties’ collaboration – our association (NPO), private firm (Fukumi Co., Ltd.) and Japan Lutheran Church. We entered this project for the 11th Partnership Grand Prize and won the excellence award in February 2015.

◎Study meeting and workshop
We have been holding a ‘workshop twice a year since 2013. This is to teach nutritionists, nurses, food radiation analysts, and caretakers how to protect themselves/children against food radiation from environment and food.
July 2013  the 1st meeting “current state of the radioactive contamination over the food, due to the nuclear power plant accident” (lecture by our 2 executive directors, Maru Mitsue and Sawada Kazumi)
October 2013  the 2nd meeting “Low level radiation effect on human body”(by Ms. Sakiyama Hisako, Takagi School)
July 2014 the 3rd meeting “Food radiation measuring” (by NPO Fukushima 30 year project)
October 2014 the 4th meeting  “let’s have the concrete knowledge about what we can do to protect children living in children’s homes against radiation” (by Mr. Anzai Ikurou, emeritus professor, Ritsumeikan University)

◎Public relations
Newsletter: since our first publication in March 2012, we published our newsletter 3 times a year up to the 9th number in December 2014. From 2015, we publish twice a year. The latest number (the 10th) was published in June 2015.
Web home page: it was set in April 2013, also in English in August 2014
As an NPO (registered in October 2012), we held our 1st meeting of trustees in November 2012 and our 1st regular general assembly in February 2013. We hold each year one general assembly and 3 meetings of trustees.

【September 29th 】
We took part in the 9th workshop of Aoba Gakuen. The theme discussed was “how can we support the children in aftermath of the Great East Japan Disaster”. Five Children’s homes in Fukushima prefecture were represented.
We also helped preparing the guidelines “what to do in case of emergency due to the nuclear power plant accident”
We interviewed the nurse working at Aoba Gakuen about her role.

【January ~March】
We operated further interviews in 2 other children’s homes in Fukushima city. With the support from the homes which count nurses among their staff, we started to make assessment: how skilled nurses can help.

【February】
We founded “Foster Care for Infants, Children and Adolescents in FUKUSHIMA” as a private organization.

● Achievements after the opening of our office

【April】
We started to measure the cesium density in the urine (at Aoba Gakuen). Since then we have been regularly operating this measuring for children and staffs in 6 children homes.
We have been also checking on their living conditions, so that we could analyze the result of the here-above measurement accordingly and give appropriate advice to reduce the negative effect.
We opened our secretariat office in Noda town, Fukushima city.

【Since April】
We have been regularly measureing the cesium rate in urine of children & staff, at Aoba Gakuen and 4 other children’s homes.
We have been also checking their living conditions, explaining the result of the here-above measurement and giving advice in order to reduce the negative effect.
We started the matching with the donor for the food radiation measuring room. By February 2013 we did the matching for building, interior finishing and reinforcement of the measuring room for 3 other homes.

【Since May】
We have been measuring the radiation independently at small size children’s homes (Aoba Gakuen, Fukushima Aiikuen , Iwaki Ikueisha) with a portable dosimeter.

【June】
We applied to become a Specified Non-Profit Organization .
We published our 2nd newsletter（in Japanese)

【Since August】
We started to supply the children and staffs of 2 children’s homes with Quixel Cell Badge (individual radiation measuring service).

【September】
A workshop for staff about radioactivity at Horikawa Aiseien

【October】
We got registered as a NPO
We published our 3rd newsletter.（in Japanese)
We consigned the radiation level measuring inside and outside of Aoba Gakuen to a private firm, Third Wave Co.,Ltd. They used a superficial pollution meter. This trial was carried out at 3 other children’s homes.
We carried out a matching with an international NGO/international organization of ambassador’s spouses. They proposed to donate the fund necessary for repair work for Aoba Gakuen building. The repair was needed in order to reduce the radiation at its hot spots.

【November】
The 1st annual meeting of trustees.
A meeting of nurses working at children’s homes in Fukushima city

【Since December】
We have been operating an ultrasonic thyroid gland check for children & staff in 4 homes.

【January】
A workshop about radioactive substances, personal health record book etc. (the workshop was held just after the 10th workshop of Aoba Gakuen)

【March】
We distributed the personal health record book (temporary edition) to the “leaving” residents (= children having reached the age to leave the children’s home). 2 children’s homes got this distribution.
We published our 4th newsletter（in Japanese)

【April】
We put our home page in full operation.

【May】
We conducted a national survey about how skilled nurses work in children’s homes
We sponsored monthly decontamination of the roads between Fukushima Aiikuen and school for 4 consecutive months from May to August.

【July】
The 2nd annual meeting of trustees.
The 1st nutrition study meeting: “current state of the radioactive contamination over the food, due to the nuclear power station accident”

【August】
We obtained through matching the financial help for “AN-NON FUND”: anti-radiation concrete base replacement work for Fukushima Aiikuen
We published our 5th newsletter.（in Japanese)

【September】
We celebrated our 1st anniversary as NPO

【November】
The 3rd annual meeting of trustees and 1st extraordinary general assembly
A study meeting for the head directors of the children’s homes:” long term effect of low level radiation – how the personal health record book can be useful –“

【December】
We obtained the financial help through matching from Goldman Sachs X Save the Children Japan to improve the studying condition of Terakoya, in Iwaki Ikueisha
We published our 6th newsletter（in Japanese)

【March】
We distributed the personal health record book (2013 version) to the leaving residents from 5 children’s homes.
One of the 5 homes chose to hand it 6 months later, when the former residents were checked on by their own caretaker.

【September】
We operated thyroid gland ultrasound check on the children and staffs of children’s homes.
We put the digital health data recording system into practice in 6 children’s homes (in collaboration with Japan Lutheran Church)

【October】
4th nutrition study meeting (special lecture for our 2nd anniversary) “let’s have the concrete knowledge about what we can do to protect children living in children’s homes against radiation” (by Mr. Anzai Ikurou, emeritus professor, Ritsumeikan University)
3rd annual meeting of trustees

【March】
Distribution of the personal health record book (digitalized data, printed out onto paper) to the children leaving (either by graduation or by custody reinstatement to the original family) from 3 children’s homes.

others：
We translated the English instruction of the Geiger counter donated to Fukushima Aiiikuen Gakuen, into Japanese. We prepared a DVD which showed how to use it.
We lent laptops to nurses working in children’s home in Fukushima city.